Number 1. The most expensive work of art sold at auction in 2020. 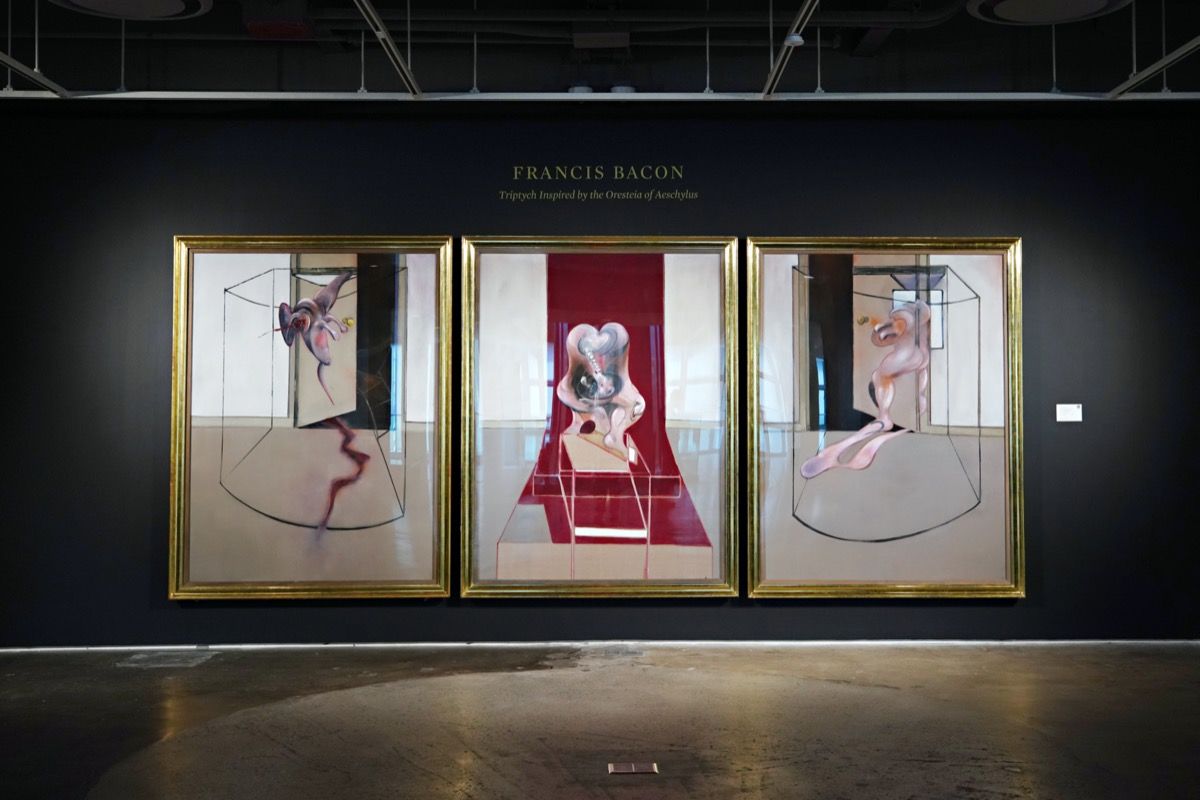 Francis Bacon’s painting The Triptych Inspired by Aeschylus’ Oresteia, from 1981, opens our overview of the most expensive auction works in 2020. Of course, in the field of modern art. Chinese works from the seventeenth century have crept into the top ten, but we will omit these.

Bacon’s triptych was the first year since 2016 that no work of art exceeded $ 100 million. The highest prices were clearly lower than in previous years, although we also witnessed a turning point in the development of the online art market. Nevertheless, it ranks first with a price tag of $ 84 and a half million.

Oresteia is three myths about revenge: the first is about the murder of King Agamemnon after his return from the siege of Troy – Queen Clytemnestra takes revenge for her daughter Iphigenia, in the second Orestes murders her mother Clytemnestra to avenge her father; and in the third, Orestes is pursued by Erin, also known as Furies, the three female gods of revenge.

The character studies under the cross are a surreal graphic by Francis Bacon. Completed in 1944, the work initiated Bacon’s career as one of the most influential artists of post-war Great Britain.

Francis Bacon was born in Dublin in 1909. Named after his famous English philosopher and scientist ancestor, Bacon had a traumatic childhood. His family was stationed near a British military base, and Bacon heard soldiers continually practicing their drills. He stated that this closeness to violence while growing up influenced his work. Unfortunately, he was also exposed to domestic violence, especially when his father discovered that young Francis was trying on his mother’s clothes. He was expelled from his family home and forced to live as a tramp, traveling between London, Berlin and Paris.

After moving to London, he started working as an interior designer. One of his mentors, artist Roy de Maistre, encouraged him to take up painting. In 1933 he showed his first work “The Crucifixion”, partly based on Picasso’s Three Dancers. The song received critical attention as it touched upon themes of pain and suffering that would continue throughout his career. His first success inspired him to organize his own exhibition the following year, but it did not attract attention and Bacon returned to vagrancy, destroying most of his early work.

Asthma prevented him from serving in the British Army during World War II. As he said: “If I were not an asthmatic, I might not take up painting at all”. After the war, he returned to painting and created three studies for the figures under the cross, which were met with great recognition. He organized an exhibition at the Hanover Gallery in 1949, where a series of Heads.

Bacon has had many tumultuous relationships in his life, but the most notable was his relationship with George Dyer. Dyer liked Bacon’s money and used it to finance his adventures with friends, and was seen in the community as a problem. In 1971, Dyer accompanied Bacon to his exhibition at the Grand Palais in Paris, which became the highlight of Bacon’s career, and ranked him as the greatest living painter in Britain. On the eve of the exhibition, there was an argument between the lovers, as a result of which Bacon ran away from the hotel room to find Dyer dead on his return. The cause of death was an overdose. The sadness after the death of his lover inspired Francis to paint many portraits of Dyer, as well as the critically acclaimed Black Triptychs.