Do you hold a plushie and eat a cutlet? Exactly … None of us are innocent.

Sirens of the lambs, Banksie installation from October 2013. How time flies!

The installation consisted of an old truck with stuffed animals depicting animals and the sounds they make. The truck drove around New York for two weeks, sparking variable, sometimes violent reactions around the world.

It’s a beautiful and hit thing, isn’t it? In a simple gesture, he brings out all our hypocrisy and calls the perversion of our cruelty by its name. It is said that modern art arises in the artist’s dialogue with the viewer, it is a kind of game between these two sides. But what does it mean? Just take a look. Simply put, the artist notices the hypocrisy we all call the routine of everyday life, and then finds a way to expose it. Banksie’s work is not played out in the street … Banksie’s work is played out in conscience. Do you hold a plushie and eat a cutlet? Exactly… 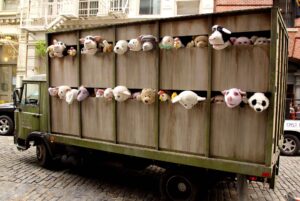 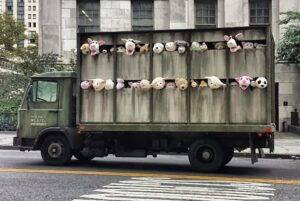