Sculpture by Zdzisław Beksiński at the ToTuart Gallery

Famous for his unique style, Zdzisław Beksiński is an artist who fell in love with the whole world of art in his mysterious work. Although he is best known for his painting work, he created in many other techniques. Initially, he was fascinated by black and white and experimental photography, then sculpture. Compared to the drawings and paintings made by the artist, he left relatively few sculptures. As he said himself, this amount did not result from underestimating the sculpting technique (on the contrary). It resulted from the lack of appropriate conditions for its creation, spatial limitations and costs related to the production of castings.

Despite these obstacles, it was the creation of sculpture that became a turning point in his artistic career. Thanks to the reliefs made in the style of allusive abstraction, the artist appeared on the Polish art scene.

Contemporary casts of his works were created in 2021 under the technical and substantive supervision of the Historical Museum in Sanok, which is the only heir of the proprietary copyrights of Zdzisław Beksiński. They belong to a limited edition of 8 copies and 4 original copies. These are strictly controlled works, faithfully reproducing the plaster models presented at the permanent exhibition in the Zdzisław Beksiński Gallery at the Historical Museum in Sanok.

The sculpture is made of patinated bronze and mounted on a wenge-colored mahogany platform. Its dimensions are 19.7 x 21.5 x 18.7 cm. It has the signature “Beksińśki” and the edition number “1/8”. The artist did not give titles to his works, not making the work of art critics easier. Thus, he did not suggest one specific interpretation of his works. However, due to the shape of this sculpture, it is sometimes called in the artistic circuit “Head”. It resembles a punctured or deformed skull, thus fitting the artist’s dark style.

The work belongs to a small series created in the years 1957-1962, when, after the period of creating relief images in the spirit of allusive abstraction, the artist took up figurative sculpture. The so-called “Heads” was created in a negative form, inspired by the works of Henry Moore. It consists in contrasting concave and convex forms in the sculpture, thanks to which the work does not remain indifferent to the space, but enters into a dialogue with it, strongly corresponding with it.

Gypsum models from the series of the so-called During the artist’s lifetime, “Główs” was displayed on an individual insert at the Viewer and Artist’s Gallery in the Old Orangery of the Royal Łazienki in Warsaw (1964).

Janusz Bogucki, the curator of this exhibition, spoke about them as follows: “The collection of skulls, amazing in their expression, is so pleasing to the eye with its precision and clever variety of sculptural forms […] that at first the viewer is shocked and will soon savor the beauty of these disturbing sculptures.” . 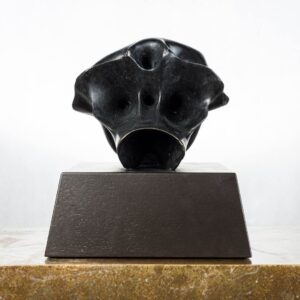 The works of Zdzisław Beksiński on the art market 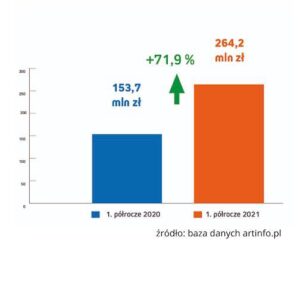 Despite record-high indicators and constantly growing turnover, the Polish art market is highly undervalued both in terms of art prices and volume. Compared to mature art markets such as China (which is today the largest art market in the world), Great Britain, France, Germany, the United States or Japan, our home market is still “in its infancy”.

The Polish art market is also characterized by the undervaluation of sculpture in relation to painting. These tendencies are especially visible in the sale of works of artists working in both these fields. In the case of the works of Zdzisław Beksiński, the price of painting works has increased almost seven times in the last 6 years, and the price increase in 2021 (compared to 2020) was 66%.

Increase in the prices of Zdzisław Beksiński’s paintings in relation to individual years based on the artinfo.pl auction listings 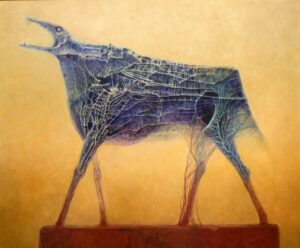 The work of Zdzisław Beksiński is one of the most interesting phenomena of the Polish and world avant-garde in the years 1950-1960. It is permanently inscribed in the canon of Polish art history and has become the object of desire of every collector. His outstanding and small sculptural work remains a collector’s pearl for lovers of contemporary art, which, combined with the underestimation of the market prices of sculptures, is a clear investment recommendation.