Wojtek Siudmak is one of the most famous contemporary Polish artists, valued in the country and abroad. His art belongs to the trend of fantastic realism, rooted in surrealism. He creates his paintings with masterful precision, flawlessly using perspective and chiaroscuro. His work has been appreciated by the most outstanding fantasy directors, such as George Lucas and Denis Villenueve. The latter was delighted with the painter’s work for the first time as a thirteen-year-old boy, when mesmerizing blue eyes looked at him from the cover of the book. This illustration, as well as many others for the novel Dune, just made Wojtek Siudmak. This year, a screening Dunes directed by Denis Villenueve can be seen in cinemas. 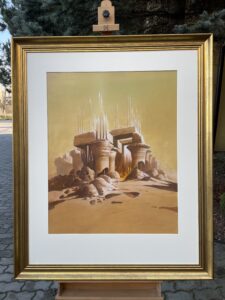 Colonnes de conscience is one of the illustrations made for this novel. The picture shows a monumental, covered with sand almost to the top of the building. The capitals of its columns resemble those located in one of the best-preserved temples of ancient Egypt – the temple in Luxor, known as the Temple of the Birth of Amun. Looking closely, we see that the columns are so deficient that according to the laws of physics, they should fall apart. However, they are lifted by some mysterious force that materializes above the building in the form of luminous pillars.

The author himself says that he has a deep aversion to illustration and strict imaging. He prefers to leave the reader space for his own interpretation. And so is Frank Herber, the author Dunes, presents the figures in the fog, creating an aura of mystery and understatement, so also Wojtek Siudmak, using an open composition, shows a certain fragment of the described reality. We can see this treatment in the picture Colonnes de conscience or La rébellion, but especially in pencil drawings, in which the objects and characters most important for a given scene are depicted with the greatest precision. What surrounds them is shown in a sketchy way so that the artist directs our attention to the most important parts of the action. Characteristic for Siudmak’s paintings is also the aura of mystery accompanying the performances. It is not only the subject matter, but also the color scheme, which can be seen in the painting Inaccessible sommet. An almost monochromatic landscape, in the applause of pale greenery, gives the whole show a mystical atmosphere. The playing of the mountains, shrouded in light resembling the glow of the moon, intensify the impression of the ephemeral of the whole scene. In the foreground, there is an almost invisible, turned-down figure, separated from the top by a chasm. In the same way, the viewer is turned towards the painting, staring at the “unavailable peak”. The gulf that separates the viewer from the top is the border between reality and the image, the world around us and the world created by the painter. In this way, he “draws” the viewer into a certain game, allowing him to identify with the inverted character and directs the mind to reflection.

One of the painter’s motto is: “Only a dream can overcome all barriers.” In fact, these images are full of amazing dream-like connections. We see this in the painting by La Visite, v with which unnatural size jellyfish float above the mountains and glide across the sky like clouds. In this mixture of reality and dream lies the captivating childish pursuit of another dimension, where the ordinary is more beautiful and where magic happens every moment.